On 12/22/17, the Rhode SPCA, in conjunction with the Rhode Island State Police and Exeter Animal Control, conducted in an investigation, resulting in the seizure/surrender of 24 dogs from a residence in Exeter, RI. The initial complaint alleged there were a number of dogs on the property secured outdoors, without access to adequate shelter. 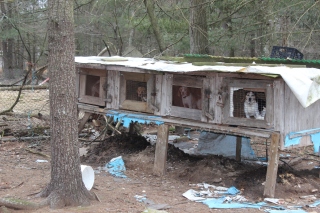 Upon arrival, and after further investigation, the RISPCA found several of the dogs to be lacking adequate shelter to protect them from the elements as the ambient temperature at that time was 28 degrees Fahrenheit, with a wind chill factor of 19 degrees. We also found several of the dogs living in unsanitary conditions. In total, the RISPCA took custody of 14 Beagles, 6 Brittany Spaniels, and 4 Chihuahuas. Exeter Animal Control and The Potter League for Animals assisted with the removal of the dogs. 15 of the dogs are currently being housed at the RISPCA and 9 are being housed at The Potter League.

These dogs are currently available for adoption here at the RISPCA or will be within the next week. If you are interested in adopting please fill out an application.